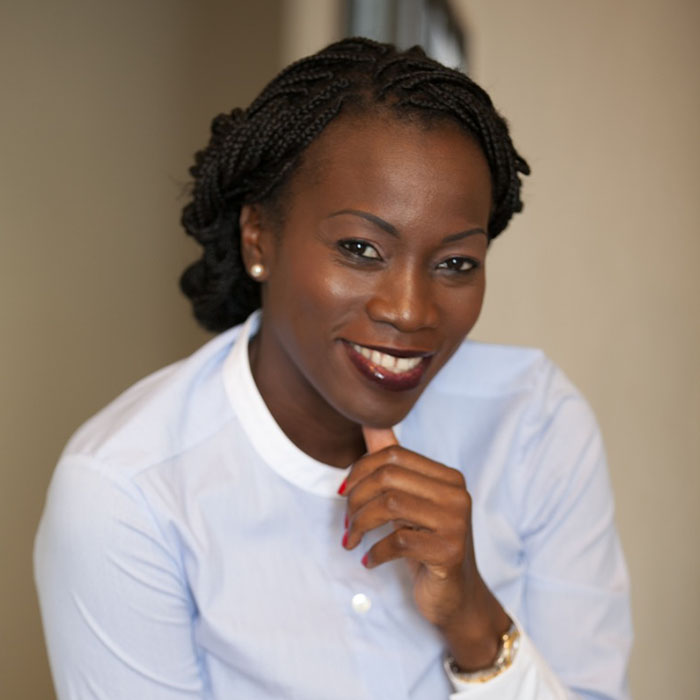 “When you educate girls, you educate a country” This is the credo of this Congolese woman, a fervent activist for the women’s cause, who maintains that little dreamers become visionary women! As a child, already an entrepreneur, she baked pastries and made dresses for sale, and opened a business selling advertising postcards. At the end of her studies, she co-founded EXP-Comunicard, one of the first marketing agencies in sub-Saharan Africa. She then became involved in the cause of women. She created a micro-credit system called “Femmes d’Avenir” (Women of the Future), the magazine International Working Lady and the Kinshasa Rose Foundation (to support the fight against breast cancer in the DRC). Since 2013, Patricia Nzolantima has represented Congo in the Young Entrepreneurs’ Alliance at the G20 summit. In May 2016, she published “Caravane des Portraits*”, a book in praise of the women whose work is helping to create the Africa of tomorrow.
She joined our network of Ambassadors in 2017.

Patricia Nzolantima has over 18 years of experience in entrepreneurship and women’s empowerment.

She is the founder and president of Bizzoly Holdings, a women-owned company and foundation.  In this context, she created Ubizcabs, the first taxi company run by women in the Democratic Republic of Congo (DRC) and “Ubizdelivery”, the first female logistics services. She is also the founder of Bizzoly Brands and Co. Sarl, a consumer products company specializing in household products and value chains.

Patricia Nzolantima is also the co-founder and CEO of EXP-Comuni-cart, a marketing agency based in the Democratic Republic of Congo.   In 2020, she launched the first female driver academy to empower women in transportation and logistics.

In 2012, Patricia Nzolantima was the first woman in the DRC to be selected and to have participated in the Young African Leaders , Mandela Fellowship, an initiative of former President Barack Obama. Internationally, Patricia Nzolantima is a member of several professional organizations and was a member of the Clinton Global Initiative. She has participated several times in the Global Entrepreneurship Summit (GES) and opened the plenary session of the conference with former Secretary of State John Kerry in Silicon Valley. In December 2020, Patricia Nzolantima received her PhD in Business Administration, with a specialization in Entrepreneurship, from Virginia Commonwealth University and the School of London.

In addition, she holds a master’s degree in law from the Protestant University of the Congo (DRC) and a master’s degree in business, English and marketing management from the Cape Town Institute of Studies in South Africa. In addition, she obtained an MBA from the Business School at Harvard University. She is a graduate (Cohort 4) of Stanford University’s Seed Transformation Program, the Stanford Institute for Innovation in Developing Economies, which works to end the cycle of global poverty. She graduated from Alibaba Business School, an e-founder program. A program designed to empower African business owners to create sustainable businesses.